Coilcraft’s selection of materials makes thermal aging a non-issue
The phenomenon known as thermal aging in iron powder cores has been documented by the electronics industry in recent years. The phenomenon is particular to iron powder materials. Neither ferrites nor other powder types like molypermalloy (MPP) are similarly impacted. Thermal aging refers to the characteristic of iron powder cores where the core loss increases dramatically when the core is exposed to high temperatures over some period of time. The increased core loss leads to less efficient performance and can lead to a cycle of increased self-heating, in turn causing further increased loss and so on. In a worst-case scenario, if unchecked, this cycle can result in a devastating thermal runaway. Making this problem even more troublesome is the fact that, depending on the operating temperature, the time required to trigger thermal aging may be hundreds or thousands of hours — something that falls beyond normal production line testing. Thus, gone undetected, the problem could lead to a potential field failure issue. Thermal aging presumably has existed in iron powder cores for a long time, but it was not much of a concern when electronics operated in environments at or below 65°C. But the proliferation of electronics into higher-temperature environments of 85°C and above, along with the popularity of molded inductor styles that may contain iron powder, has brought new focus to this phenomenon. Iron powder core materials have a proven record of reliable performance and value and are the core material of choice for a wide range of applications, even in high-temperature environments if suitable materials are used. Coilcraft XGL, XEL, XAL, XFL, PFL and XPL families (a.k.a. Ltra) use such materials and are not subject to the thermal aging phenomenon, as seen in the following figures. Core loss was measured after exposure to a variety of time and high temperature combinations. Figure 1 shows the stability of the material used in Coilcraft iron powder core inductors, with core loss stable after aging at 165°C for 20,000 hours. (Less than 5% change in two years at high temperature.) 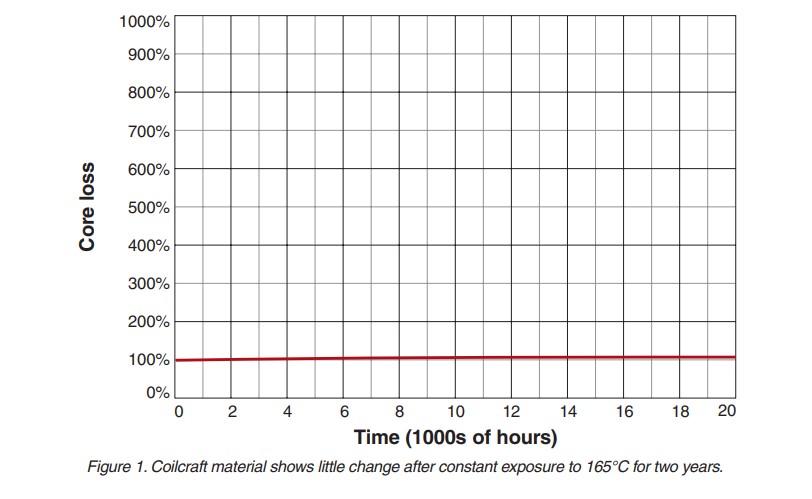 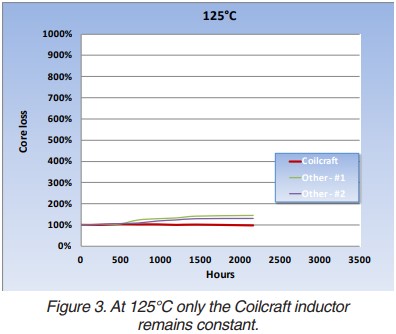 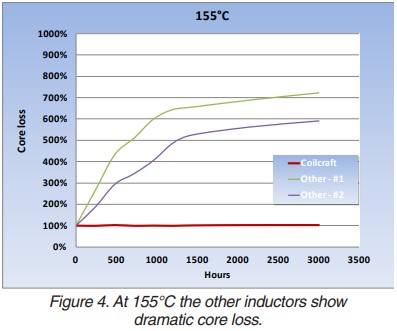 Figure 2. At 85°C core loss is stable for all three inductors. Figure 3. At 125°C only the Coilcraft inductor remains constant. Figure 4. At 155°C the other inductors show dramatic core loss. Figure 5. At 165°C one inductor shows an increase in core loss of nearly 1000%. Details of the exact materials used by Coilcraft and other inductor manufacturers are undisclosed, being proprietary information, so it is not feasible to make exact predictions on the lifetime effects of thermal aging. Nor is it feasible to make definitive statements of suitability for use in any particular application. The information provided here is based on the test results described with the single intent of informing about the thermal aging phenomenon in iron powder cores.